One Too Small and One Too Large by Ed Valitutto

With near perfect weather, my grandson Nick joined Dave Spendiff and me for a striper trip on the Friday of Thanksgiving weekend. We left my dock at 6:00 and joined a procession of boats exiting Barnegat inlet and heading north to the striper grounds.
Unfortunately, it was a tough day. Bird play was sporadic and not very plentiful. We read plenty of bait but saw very few fish echoes. After an hour jigging near the birds without any results, we decided to go on the troll with most of the fleet. We tried two different umbrella rigs – one with green shad bodies and one with black tubes. Nick got his fish on a black tube. It was a nice fish but didn’t make the the 24″ tag minimum. Dave decided to try a Stretch Mann’s plug and after some time in the water, his fish took it. Unfortunately, it was a nice healthy striper but just over 39″, so it’s still out there swimming!
Both fish were taken with nothing but bait on the screen and both were taken ~2 1/2 miles off shore towards the inlet. We witnessed only one other short taken during the entire trip.
Since we promised to be back by 1:00, we headed home at 11:45. Low tide was 11:43 and going through the inlet was quite the adventure. Fortunately, there were no onshore winds to make the passage even more difficult. Overall, a wonderful and enjoyable day! 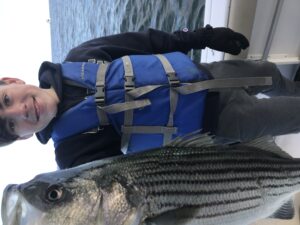