Battle on the Beach – VHFC took over officiating the “Battle on the Beach” high school surf fishing tournament in 2019. The annual contest has students from Lacey Township High School, Barnegat High School, Southern Regional High School and Mates Academy (Marine Academy of Technology and Environmental Science) of Manahawkin competing for top bragging rights on the beach in Barnegat Light. The winning school gets their name engraved on a trophy that is displayed in the school’s lobby and a $1,000 scholarship donated by LBI Surf Fishing Committee. This year’s weather was beautiful but there were too many dogfish, skates and weeds Nevertheless, the kids were wonderful and fished non-stop until the final horn. Two stripers including a 27 1/2″ looked like it would give a victory to Mates but three bluefish up to 19″ close to the finish time sealed it for Southern Regional. The kids had a blast and the cold water did not stop them from getting wet and enjoying the afternoon.

VHFC Spring Surf Outing – The surf tournament has been postponed until fall. Details are not yet finalized but stay tuned.

VHFC Annual Fluke Tournament – The VHFC Fluke Tournament will be held on the 2nd Saturday in August following the Friday club meeting. August 13 /14 (rain date) for 2022. Entry fee is $20 per angler with all monies returned in prizes. Following the contest, VHFC hosts a picnic / BBQ at the Mill Creek Pavilion for entrants and their guests. Please fill out the form VHFC Fluke Tournament and send it with your check to VHFC, PO Box 1026, Manahawkin, NJ 08050.

VHFC Dinner – Details are not yet finalized but VHFC will have a dinner in the fall. The last several dinners were held at Kostas Grill in Tuckerton and were enjoyed by all attendees. Always a great time and a good excuse for members and friends to gather for some fun! Further details will be provided as available.

VHFC Fall Fishing Trip – Details are not yet finalized but VHFC will have a trip out on a local party boat for a fun day fishing in October – November. Stay tuned for further details.

2022 Fish of the Month (FOM) – Several additional contests and improvements have been made including Surf Only and Young Angler contests. Details can be found on VHFC Contest Rules on the pulldown menu under the Blue Banner Contests/Tournaments across each page.

VHFC T Shirts – New T Shirts were selected in 2019 and are still available for purchase. Look for the order form in our Newsletter or order at any club meeting. Sizes range from XS (Extra Small) to 6XL and are available in nine colors. Shirts have long sleeves and feature UPF 50 Sun Protection. White is shown in the photo. 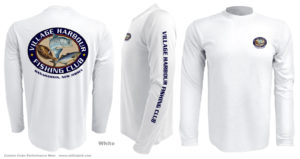 VHFC Hats – New hats also became available in 2019 and we have plenty still available. Hats are khaki colored, feature a high definition VHFC patch on the front and  sell for $20. See  photo below. 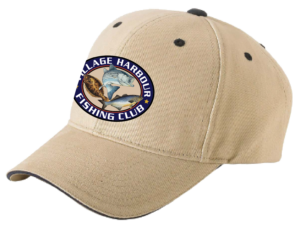