I went out this morning at 4 am and immediately started catching dogfish. Two hours later had 8, first four were smooth then spiny. Caught the 39-1/2” striper shown below and released it. Stayed and got 7 more dogfish. Wind really picked up. I ran out of bait and called it a day. Maybe tomorrow will be the day! The striper shown at the beginning of the report was caught on 11 November, photographed and released. It measured 40 1/4″ and is my entry for the striper FOM. 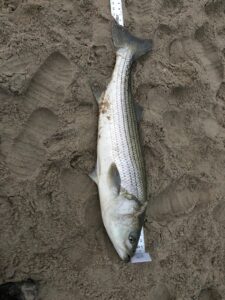