I went out for a day of back bay fishing down in FL on Dragon Fly Charters. I had a blast! We started off cast netting for Pilchards and my guide made throwing a 20′ diameter net look like child’s play. We had tons of pilchards in two casts.
We started out casting for snook and I boated the snook in the photo. Snook are catch and release only so it was quickly released and sent on its way. I had two more on – one was a beast – but they both got off.
I then caught the bonnet head shark shown and after a sporty battle on light tackle, released it for another day.
We then went after speckled trout. What a great fishery! Trout have a three fish limit over 15″ with only one of the three being over 18″. We caught them on both pilchards and shrimp under a popping cork. One was 15″, one 17″ and one 19+” We also looked to no avail for sting rays with cobia swimming over them. We saw a few rays but all without cobia. There’s always next year! 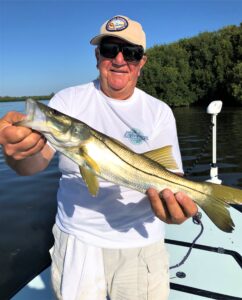 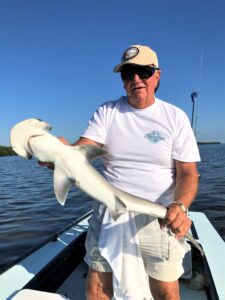