I just finished a long weekend trip to the Savannah, GA area to visit two of my sons. I went fishing with my son Garth and his youngest son Carson on Saturday with a fair day of catching – both Garth and I had our Bay Slam by catching a flounder, redfish & sea trout. On Sunday, we left a bit later so that we arrived at “Black Man’s Cove” 2 hours before dead low tide. My son named this location out of respect of the two old men that arrived at the end of this creek he was in to get out of a howling wind. They arrived in two trucks and fished from the bank – my son had a long lunchtime conversation on that day and other encounters with them, at this location.

They were not there on this Sunday to witness my son’s first cast with a “mud dog” (Killie) 24 inches below a cork and hooked through the lips on a small 02 circle hook. It hit the water and disappeared below the water almost instantly. The rod was slowly raised, reel engaged and POP, the line parts – but more about that later. As the tide flowed out, the catching became more intense with 80 redfish and two very small flounder boated for the last 2 hours of the outgoing and 1st hour of the incoming. All fish were caught in a really small area. Absolutely insane fishing with 4 triple simultaneous landings and 6 doubles. We ran out of 3 dozen mud dogs, 1 dozen frozen shrimp, and 16 finger mullet cast netted in desperation. The mullet were live-lined and also as cut bait. The redfish sizes ranged between the fish shown in the second photo and were caught on light, “freshwater” rods with small 2000 sized reels. An absolute thrill!

On our way out of the cove/creek my son spotted the cork from his first cast break off and with a little trolling motor finesse, my grandson was able to grab the cork – the fish still hooked up! Took 3+ hours to boat that first hooked red! The last picture is an oyster bar that is at the heart of redfish and trout fishing and navigation in the southeast bays. 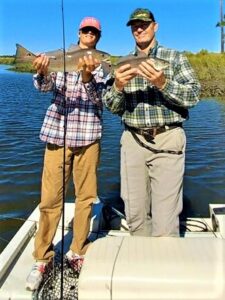 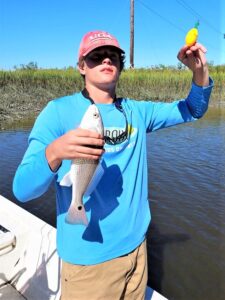 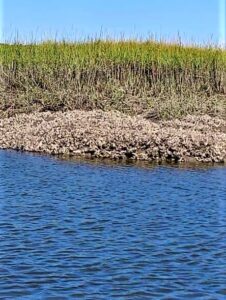