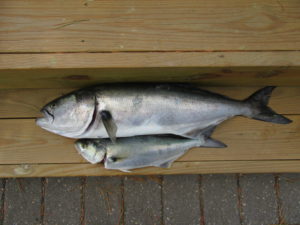 I left the dock around 6:20 this morning and headed for Manahawkin bay where I started the troll for bluefish with a Tony Aceta spoon and a Yellow Bomber Magnum A. l trolled north past Main Point as far as I could go before the water became too shallow, picked up and motored to the “limestone” channel just west of Sandy Island. Marked a bunch of fish, but was only able to entice only one small “cocktail” bluefish on the swimming plug. Went back to Manahawkin bay and trolled endlessly without a touch. Hours had passed, so I decided to finish out the trip by trolling over to the bridges near Ship Bottom and try plugging for schoolie stripers. As I entered the channel off of the ICW leading to the bridges a rod went down resulting in a 9.2lb bluefish being landed. Over the next 2 hours I was able to pick up 10 more, much smaller, blues before calling it a day. Lagoon and bay water temps were 50 degrees when I started and 58 going home at 2 pm. No telling where they will be tomorrow, but they are in the bay, so just go out and find them.