Fished a few hours in the morning the last two days with my neighbors in Great Bay. Saturday we had about a dozen Blues. We kept 5 and released the rest with the biggest over 8 lb. We also lost quite a few. We went out again on Sunday morning and discovered that the gators had moved in. All were 8 lbs and up with the largest one caught at almost 13 lb. They all were great fighters and look like small Tarpon jumping and shaking their heads out of the water trying to throw the hook. We lost quite a few like that and kept 4 while releasing the rest. 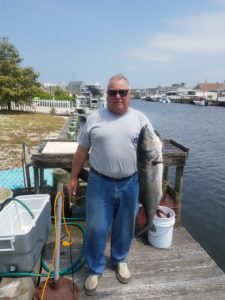